Must Sexual Harassment Victims Continue To Complain Until Someone Addresses Their Complaint? 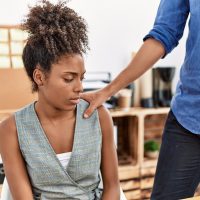 In that case, a woman named Dunlap brought a sexual harassment case against her former employer, Spec Pro, Inc. (Spec Pro), pursuant to Title VII of the Civil Rights Act of 1964 (Title VII). Title VII makes workplace sexual harassment an unlawful discriminatory employment practice. To violate Title VII, sexual harassment must be sufficiently severe or pervasive to alter the conditions of the victim’s employment and create an abusive working environment. Dunlap maintains that Spec Pro violated Title VII by requiring her to work in a sexually hostile environment.

Dunlap did not complain about the sexual harassment to a program manager other than Albertson and did not report the incidents to a Spec Pro director. In addition, Dunlap did not request a meeting with a manager from an area outside of her division.

Do Not Have To Exhaust Every Option

Spec Pro filed a motion with the trial court seeking dismissal of Dunlap’s sexual harassment claim. In moving for dismissal, Spec Pro argued that it could not be held liable for any sexually harassment Dunlap experienced because she did not complain to other program managers or directors once it became clear that Albertson would not take corrective action. Spec Pro contended that, given the availability of alternative avenues to make her complaint under its sexual harassment policy, it was unreasonable for Dunlap to continue to complain to Albertson. The trial court denied Spec Pro’s motion for dismissal and ruled that “whether it was unreasonable for Dunlap not to raise her complaints of sexual harassment with other program managers or directors at Spec Pro” was an issue for a jury to decide, not the trial court as a matter of law.

In support of its ruling, the trial court explained that because her immediate supervisors participated in the sexually harassing behavior, Dunlap complied with Spec Pro’s complaint procedure by reporting the harassment to an alternative program manager, Albertson. The trial court also observed that “Albertson allegedly lost Dunlap’s book that contained the dates of the sexual harassment incidents, making it uncertain whether raising the issue with another program manager would lead to tangible results.” The trial court also pointed out that Spec Pro “cites no cases that obligates an employee to exhaust every option identified in the employer’s handbook, especially when the handbook does not require exhaustion.” In other words, the trial court reasoned, Dunlap, in order to preserve her rights, was not required to “go from manager to manager” until she found “someone who [would] address [her] complaints.”