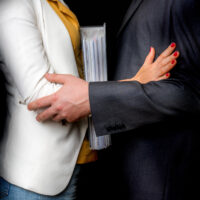 In a sex-based hostile work environment case, the critical issue is whether members of one sex are exposed to disadvantageous conditions of employment to which members of the other sex are not exposed. When a woman claims that she was subjected to humiliating, abusive, degrading, or physically threatening behavior to which her male co-workers were not, the discriminatory conduct becomes actionable under the federal anti-discrimination laws. As explained by the U.S. Eleventh Circuit Court of Appeals in Reeves v. CH Robinson Worldwide, Inc. 594 F.3d 798 (11th Cir. 2010), women have the “right not to suffer conditions in the workplace that [are] disparately humiliating, abusive, or degrading.”

In this article, our Inverness, Florida hostile work environment harassment attorneys explain how the decision by the U.S. Second Circuit Court of Appeals in Castagna v. Luceno, 2014 WL 840820 (2d Cir. Mar. 5, 2014) shows that a woman can prove that she worked in a sex-based hostile work environment when the harasser does not subject male employees to the same kind of abusive behavior.

Castagna was employed by Majestic as a receptionist. During her employment with Majestic, Castagna claims that she was subjected to discriminatory intimidation, ridicule, and insult on the basis of sex by the owner of Majestic, Luceno. The alleged sex-based abusive behavior by Luceno towards Castagna included yelling at her, swearing at her, calling her stupid, and telling her she “can’t leave” her desk. Castagna further claims that Luceno subjected other female employees to discriminatorily abusive conduct, including yelling at them, swearing at them, and hurling sexual epithets at them. Luceno also subjected Castagna and other female employees to physical threats. However, Luceno never physically threatened male employees.

In reversing the legally erroneous decision by the trial court, the Second Circuit determined that “a reasonable jury could conclude that Castagna’s workplace was permeated with discriminatory intimidation, ridicule, and insult which were sufficiently severe or pervasive to alter the conditions of her employment.” In support of its conclusion that Castagna, the appellate court pointed out that “Luceno directed physical threats at three female employees, including Castagna, on separate occasions, but he never physically threated men.” Under well-established law ignored by the reversed trial court, “evidence of physical threats is highly probative of the severity of the alleged hostile work environment.” The court of appeals explained that the “lack of any evidence that Luceno physically threatened men—as opposed to women—supports the inference that Luceno singled out women for physical threats because of their sex.”

Harassment Directed At Women & Not Men

The Second Circuit also pointed out that Luceno’s “most extreme outbursts were directed at women.” “A reasonable jury would be entitled to conclude that such comments—at least in conjunction with the evidence of physical threats—were either sufficiently severe or sufficiently pervasive to have altered Castagna’s working conditions.” Thus, the Second Circuit determined, the trial court “erred in concluding that no reasonable jury could find that Castagna was subjected to a hostile work environment because of her sex.”