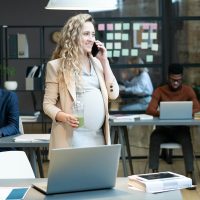 In 2013, Vasoli accepted a marketing job at Yards. Vasoli wore many hats at Yards. Over the course of her employment, Vasoli’s role encompassed, at various times, graphic design, social media, public relations, communications, design production, human resources, and project management. Although she started out as the only marketing employee at Yards, in 2015 two employees joined the marketing team under her supervision. In 2018, the company hired a man as Chief Marketing Officer. Vasoli reported directly to the Chief Marketing Officer.

On July 9, 2019, Vasoli met with the CEO and the Chief Marketing Officer. Vasoli asked for a leadership position in the Marketing Department. Their response to Vasoli’s request was “essentially they were figuring stuff out.” By the time of this meeting, both men knew about Vasoli’s pregnancy. Over the next two months, job responsibilities were taken away from Vasoli, including project management, point of sale, and public relations. No other employees in the Marketing Department had their scope of work decreased during this time.

On September 5, 2019, the CEO terminated Vasoli’s employment. The CEO told Vasoli that the company was in a “very challenging financial circumstance” and had to eliminate her position. During the litigation, Yards claimed that the Marketing Department was the only area where the company could afford to lay off employees. Vasoli was the only woman in the Marketing Department and had worked there the longest.

Yards filed a motion with the trial court seeking dismissal of Vasoli’s pregnancy discrimination claim. In support of its motion for dismissal, Yards argued that it began experiencing financial difficulties in 2017 and ultimately laid Vasoli to save money. The trial court denied Yards’ motion for dismissal and ruled that Vasoli was entitled to proceed to a jury trial on the issue of whether she was fired because of her pregnancy in violation of the PDA.

In denying Yards’ motion for dismissal, the trial court focused what happened directly on the heels of Vasoli’s disclosure of her pregnancy. The trial court pointed out that “within weeks of learning of her pregnancy,” Vasoli’s supervisors began taking work away from her and not from her male co-workers in the Marketing Department. The trial court also observed that Vasoli was fired about two months after she announced her pregnancy and two male co-workers in the Marketing Department, who had less experience and seniority, were not. The trial court further noted that Yards took away Vasoli’s job responsibilities and then fired Vasoli even though she had received a good performance review and a raise in recognition of her hard work in March 2019.

In denying Yards’ motion for dismissal, the trial court also focused on evidence raising questions about the CEO’s motives in selecting Vasoli for termination. The CEO testified that it could be disruptive when an employee goes on leave and an employee going out on leave could create a headache for the manager who must make sure that everything that the employee handles is completed. The CEO also testified that pregnancy could be a distraction and, generally, people focus better when they do not have personal distractions. The CEO further testified that it is generally easier for employees to be more flexible with respect to their work hours, or to arrive early or stay late when they do not have young kids. Thus, the CEO’s remarks reflected negative pregnancy-based stereotypes that employers often use in justifying the termination of pregnant employees.

Based on this evidence, the trial court concluded that “a reasonable jury could disbelieve [Yards’] proffered justification” for firing Vasoli and find that pregnancy discrimination was the real reason for Vasoli’s termination.