Pregnant Employee Told By Employer: “We Don’t Have Any Light Duty For Pregnant Women” 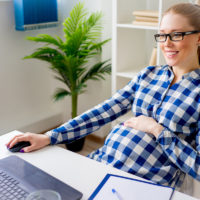 As explained by the U.S. Supreme Court in California Fed. Sav. and Loan Ass’n v. Guerra, 479 U.S. 272 (1987), Congress passed the Pregnancy Discrimination Act (PDA) to unambiguously establish that discrimination on the basis of pregnancy, childbirth, or related medical conditions is a form of sex discrimination prohibited by Title VII of the Civil Rights Act of 1964. The PDA mandates that “women affected by pregnancy, childbirth, or related medical conditions shall be treated the same for all employment-related purposes . . . as other persons not so affected but similar in their ability or inability to work.”

In that case, the U.S. Equal Employment Opportunity Commission brought a lawsuit against the former employer, Horizon/CMS Healthcare Corporation (Horizon), on behalf of four charging parties (the Charging Parties) claiming pregnancy discrimination in violation of the PDA. During their employment with Horizon, the Charging Parties became pregnant. As a result of their pregnancies, the Charging Parties were placed on work restrictions by their respective doctors. The work restrictions included various limitations on the amount each Charing Party was allowed to lift. Each Charging Party could have performed all of her job duties with the exception of the heavy lifting.

Horizon maintained a policy where it allowed employees to work modified duty positions consistent with any work restrictions employees by an employee’s doctor. However, the policy limited its availability to employees who sustained a work-related injury while working for Horizon. Each Charging Party applied for and was denied a modified duty position.Because their work restrictions prevented them from performing all of their job duties, the Charging Parties were terminated, laid off, or placed on an unpaid leave of absence.

Bias Against Employees Who Became Pregnant

Significantly, the Charging Parties produced evidence of Horizon’s refusal to provide modified duty jobs for pregnant employees and Horizon’s hostility towards pregnant employees. When one of the Charging Parties informed her supervisor that she was pregnant and asked about the availability of modified duty work, she was told “we don’t have any light duty for pregnant women.” When another of the Charging Parties inquired into the availability of light duty work because of her pregnancy, he supervisor told her there was no light duty work for “pregnant people.” Another employee testified that when she was pregnant a supervisor told her that she was “too big to be working and removed her from the schedule.” Another employee testified that she discussed her pregnancy with a Horizon employee and was told that she “should not have take the job if she was going to get pregnant.”

In support of its finding that the Charging Parties were treated differently from non-pregnant employees similar in their inability to work, the Tenth Circuit observed that Horizon provided modified jobs to two non-pregnant employees who suffered off-the-job injuries. However, the court of appeals pointed out, Horizon refused to provide light duty positions to pregnant employees who were injured on the job during their pregnancies. This evidence, the appellate court reasoned, showed a discriminatory bias against pregnant employees in the allocation of modified duty jobs. The appellate court further found that the Charing Parties had produced evidence showing that Horizon harbored a bias against employees who became pregnant. Based on this evidence, the Tenth Circuit concluded, a reasonable jury could find that the Charging Parties were discriminated against on the basis of pregnancy in violation of the PDA.

Based in Ocala, Florida and representing employees throughout Central Florida, we have almost twenty years of experience representing employees who have been discriminated against on the basis of pregnancy, child birth, or related medical conditions. If you have been the victim of pregnancy discrimination or have questions about whether an employer must provide you with light duty work during your pregnancy, please contact our office for a free consultation with out Alachua County, Florida pregnancy discrimination attorneys. Our employee rights law firm takes pregnancy discrimination cases on a contingency fee basis.This means that there are no attorney’s fees incurred unless there is a recovery and our attorney’s fees come solely from the monetary award that you recover.