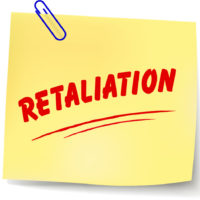 Title VII of the Civil Rights Act of 1964 protects employees from retaliation for complaining about discrimination or harassment in the workplace, including sexual harassment. In the context of a retaliatory discharge claim under Title VII, an employer is obligated to articulate a legitimate, non-retaliatory reason for the employee’s termination. The employer’s burden is to present admissible evidence of the actual reason for the discharge. As the U.S. Second Circuit Court of Appeals in Stratton v. Dep’t for the Aging for the City of N.Y., 132 F.3d 869 (2d Cir. 1997) explained, the “purpose” of requiring an employer to proffer a legitimate, non-retaliatory reason for the termination “is to force the defendant to give an explanation for its conduct[.]”

Having long represented employees who were retaliated against for complaining about discrimination or harassment in the workplace, our Central Florida retaliation attorneys have learned that employers frequently contend that the employee quit and was not fired. In doing so, employers often will not proffer a reason for firing the employee because they deny doing so. The decision in Westendorf v. West Coast Contractors of Nevada, 712 F.3d 417 (9th Cir. 2013) illustrates that when there is evidence that the employee was fired and the employer offers no reason for the discharge, the employer’s failure to proffer a legitimate, non-retaliatory reason for the termination is evidence of retaliation and enables the employee to present his or her retaliation claim to a jury for resolution.

No Evidence Of Reason For Firing Sexual Harassment Victim

In reversing the trial court, the Ninth Circuit explained that West Coast “did not offer any evidence of its reason for firing Westendorf because it denied doing so.” In fact, the appellate court pointed out, the company president specifically denied firing Westendorf. Because the only explanation proffered by West Coast for Westendorf’s separation from employment was that she quit, the appellate court held that the evidence supported a finding that the company president fired Westendorf because she complained about sexual harassment. In other words, because West Coast failed to satisfy its burden of articulating a legitimate, non-retaliatory reason for Westendorf’s termination, a jury could reasonably conclude that her termination was motivated by retaliation. The Ninth Circuit further explained that even if West Coast had proffered a reason for terminating Westendorf, a jury could reasonably find that the proffered reason was a pretext for retaliation because “she had no record of insubordination until she complained about sexual harassment.”

Based in Ocala, Florida and representing employees throughout Central Florida, we have extensive experience representing employees who have been retaliated against for complaining about discrimination and harassment in the workplace. If you have been retaliated against for complaining about discrimination or harassment at work, please contact our office for a free consultation with our Central Florida retaliation lawyers. Our employee rights law firm takes employment retaliation cases on a contingency fee basis. This means that there are no attorney’s fees incurred unless there is a recovery and our attorney’s fees come solely from the monetary award that you recover.