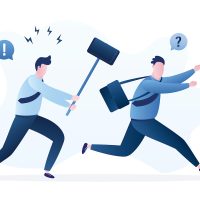 Title VII of the Civil Rights Act of 1964 (Title VII) protects employees from discrimination on the basis race, color, national origin, sex, and religion. Title VII also contains an anti-retaliation provision. Under Title VII, employers are prohibited from retaliating against employees who complain about discrimination on the basis of race, color, national origin, sex, or religion.

For years, employers have vigorously endeavored to limit the scope of Title VII’s anti-retaliation provision. They have been successful. In an unpublished decision, the Eleventh Circuit in Brush v. Sears Holdings Corp., 466 Fed.Appx. 781 (11th Cir. 2012) adopted the so-called “manager rule.”  The Brush court ruled that a “management employee” who, “in the course of her normal job performance, disagrees or opposes” the perceived discriminatory employment practices of an employer is not protected from retaliation by Title VII.  Instead, the Brush court held that in order to be protected from retaliation under Title VII, a management employee “must cross the line from being an employee performing her job . . . to an employee lodging a personal complaint.”  Under Brush, therefore, a management employee is protected from retaliation by Title VII only when the employee is complaining about perceived discrimination towards him or her.

For example, the court in McMullen v. Tuskegee Univ., 184 F.Supp.3d 1316 (M.D. Ala. 2016) rejected an argument that Brush should not be followed because it is an unpublished decision and dismissed the employee’s retaliation claim based on an application of the “manager rule” articulated in Brush.  In other words, employer-friendly courts have used Brush to limit the scope of Title VII’s anti-retaliation provision and summarily dismiss retaliation claims by applying the “manager rule.”

In December 2015, Georgia Pacific hired Patterson to work as a senior HR manager. She was assigned to the company’s mill in Alabama. In June 2017, Patterson met with the mill’s plant manager, McIllwain, and told him that she believed two African-American employees had been passed over for job opportunities that they were qualified for and that they may have a valid race discrimination complaint. McIllwain responded by telling her, “Because of who you are you are not going to tell me how to run this mill.” He told her to leave his office.

Testified Against Prior Employer

In her deposition, Patterson testified that around the time Memorial Hermann terminated the former employees she had been part of several meetings and discussions about their terminations. When her bosses at Memorial Hermann decided to fire the former employees, Patterson testified that she had advised them “not to do anything” until she could consult with another HR advisor because she was worried that firing the pregnant employees could raise Family Medical Leave Act issues and violate their rights.

On June 12, 2017, Georgia Pacific’s HR director, Hawkins, went to Patterson’s office and asked her for details about her deposition testimony. Hawkins asked Patterson in regard to her deposition testimony: “Did you support or go against the employer?” When Patterson told him that she testified “on behalf of the ladies,” Hawkins told Patterson that she meant she “went against” her previous employer and that her having done so “made things clear” to him.

On July 19, 2017, a week after Hawkins had told Patterson that testifying against her former employer “made things clear” to him, Hawkins and McIllwain went into Patterson’s office and fired her. They did not give her a reason.

At the outset of its opinion, the Eleventh Circuit observed that the so-called “manager rule” is more “aptly described as the ‘manager exception’ since it would exempt HR managers from the class of employees who are protected by Title VII’s anti-retaliation provision.” “The manager exception,” the appellate court noted, “would carve out of Title VII protection the actions of management employees who have in the course of their normal job performance opposed an unlawful employment action of an employer.”

Based in Ocala, Florida and representing workers throughout Florida, our retaliation attorneys in Citrus County, Florida have dedicated their practice to fighting for the rights of employees. If you have been wrongfully fired for complaining about workplace discrimination or have questions about your protection from retaliation under federal employment discrimination law, please contact our office for a free consultation with our retaliation lawyers in Citrus County, Florida. Our employee rights law firm takes workplace retaliation cases on a contingency fee basis. This means that there are no attorney’s fees incurred unless there is a recovery and our attorney’s fees come solely from the monetary award that you recover.