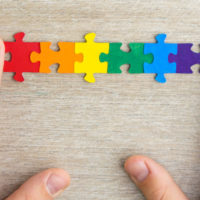 In 1998, the U.S. Supreme Court held in Oncale v. Sundowner Offshore Services, Inc. that same-sex sexual harassment is unlawful under federal law. In Oncale, a male employee was subjected to sex-related taunts, forcible sexual actions against him, and physical assaults of a sexual nature. In affirming the trial court’s dismissal of the plaintiff’s case, the Fifth Circuit Court of Appeals held that federal law does not prohibit same-sex sexual harassment. The Supreme Court reversed the appellate court and reinstated the plaintiff’s case. The Supreme Court reasoned that it is not the sex of harasser or the victim that is important to a sexual harassment claim, but, rather what is important is that the victim must prove that the conduct occurred because of the victim’s sex.

One way is for the victim to show that the harasser’s conduct was motivated by sexual desire or sexual attraction. For example, a female employee subjects a female victim to sexual remarks, sexual propositions, and physical touching of a sexual nature. Under such circumstances, the female victim is being targeted because of her sex and the conduct is linked to her sexuality.

Another method is for the victim to show that the harasser’s conduct was motivated by hostility to the presence of one sex in the workplace or in a particular job position. For example, a male dentist might believe that men should not be dental hygienists and makes harassing remarks to a male dental hygienist with whom he works. Similarly, a female college athletic director might believe that women should not coach men’s teams and makes harassing remarks to a female coach with whom she works.

Another way is for the victim to show that the harasser’s conduct was motivated by a belief that the victim did not conform to the stereotypes of his or her gender. Courts have determined that harassment on the basis of sex stereotypes satisfies the “because of sex” requirement and constitutes actionable sexual harassment. For example, male employees referring to a male employee as she and her, mocking him for walking and talking like a woman, and calling him sweetheart and doll is a form of same-sex stereotyping harassment.