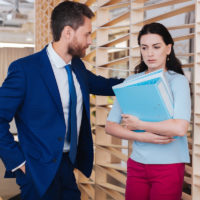 The alleged facts in the recent decision by the U.S. District Court for Colorado in Ingle v. Ieros, LLC, Case No. 1:18-cv-2759 (D. Colo. June 13, 2019) are illustrative of circumstances where a sexual harassment victim’s continued employment is conditioned upon submitting to a supervisor’s sexual advances. In that case, Jazmine Ingle (Ingle) brought a sexual harassment lawsuit against her former employer, Ieros, LLC (Ieros), pursuant to Title VII of the Civil Rights Act of 1964 (Title VII). Title VII protects employers against sexual harassment in the workplace. Ingle claimed that her supervisor subjected her to quid pro quo sexual harassment when he terminated her employment for refusing to submit to his sexual advances.

Ingle was employed by Ieros as an assistant manager. A man named Bigelow was Ingle’s direct supervisor. In August 2015, Bigelow invited Ingle to a “pool day,” which Ingle considered to be an invitation for a romantic date. Ingle refused the invitation. In September 2015, Ieros hired a man named Seymour, who was dating Ingle at the time. The relationship was initially unknown to Bigelow. In February 2016, Bigelow discovered that Ingle and Seymour were dating. Shortly after learning of the relationship, Bigelow terminated Seymour. That same day, Bigelow asked Ingle if she wanted to go out for drinks after work. Ingle took this as an invitation for a romantic date and declined the offer.

On March 4, 2016, Bigelow suspended Ingle after she told Bigelow “to stop discussing her relationship with Seymour with other employees” and told Bigelow that “you’re my manager, not my friend.” On March 8, 2016, Bigelow terminated Ingle’s employment. When Ingle received her final paycheck a few days later, the paycheck was accompanied by three records of disciplinary action describing events that took place on February 15, March 1, and March 4. Two of those records included “agreed upon improvement plans.” Ingle alleged that she “never agreed upon any improvement plan because she did not find about the plans or records until after she was fired.”

Request To Get Drinks Was Sexual In Nature