Supervisor Who Fired Pregnant Employee Allegedly Said: “I Have Too Many Pregnant Workers” 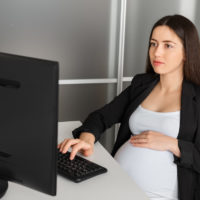 In that case, Alena Fassbender (Fassbender) claimed that her former employer, Correct Care Solutions, LLC (CCS), terminated her on the basis of pregnancy in violation of the PDA. Fassbender was employed by CCS as a certified medication aide at the Wyandotte County Detention Center (Detention Center) in Kansas City, Kansas.

During her employment, Fassbender and two other CCS employees at the Detention Center were pregnant. In late March or early April 2015, the health services administrator for CCS at the Detention Center, an employee named Thompson, overheard Fassbender discussing her pregnancy and remarked, “What, you’re pregnant too?” A few days later, Thompson learned that another member of her staff was pregnant. Fassbender testified that she heard Thompson respond to this news by stating, “Are you kidding me? Who is it? I don’t know how I’m going to be able to handle all of these people being pregnant at once.” Around this same time, another employee named Lentz-Thies overheard Thompson telling an administrative assistant, “I have too many pregnant workers. I don’t know what I am going to do with all of them.” Thompson was later instructed by members of the employee-relations department for CCS “to be careful not to make similar comments in the future.”

Employee Did Not Know Why She Was Fired

The day after she was subjected to the “final warning,” another inmate left a notice on Fassbender’s cart while she was administering medication. This time, Fassbender immediately reported the incident to Thompson. The next day, Thompson suspended Fassbender. A few days later, Thompson informed Fassbender that her employment was terminated. Thompson vaguely told Fassbender that she was being terminated because of the “severity” of her offense, without elaborating on which of Fassbender’s specific acts lead to this determination. Fassbender testified that she did not know why she was fired. Importantly, CCS admitted that Thompson made the decision to terminate Fassbender’s employment.

The trial court dismissed Fassbender’s pregnancy discrimination claim. On appeal, the Tenth Circuit reversed the trial court’s decision and reinstated Fassbender’s case. In doing so, the Tenth Circuit rejected the argument by CCS that Thompson’s pregnancy-related comments were “innocuous,” “do not reflect a negative attitude toward pregnancy,” and “were nothing more than routine concerns related to employee leaves of absences and scheduling.”

In refusing to characterize Thompson’s pregnancy-related comments as “innocuous,” the Tenth Circuit found that Thompson’s “comments could evince a discriminatory motive even assuming, as CCS argues, that Thompson’s comments merely show her concerning with managing the medical unit at a time when multiple employees were pregnant and would ultimately need medical leave.” “It’s exactly because Fassbender’s pregnancy—and looming maternity leave—posed an inconvenience to Thompson,” the appellate court reasoned, “that a jury could conclude that Thompson terminated Fassbender to ease that burden.” Thus, the appellate court explained, Thompson’s “comments [ ] suggest a discriminatory motive that could have affected Thompson’s conduct with respect to Fassbender’s termination.” Therefore, the Tenth Circuit concluded, whether CCS fired Fassbender because of her pregnancy was for the jury to resolve.