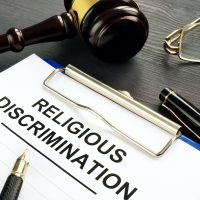 For more than two decades, our Citrus County, Florida employment discrimination attorneys have litigated employment discrimination cases in Florida courts. During the course of our practice, we’ve had many occasions encounter tension between the “religious freedoms” of employers and the right of employees to be free from discrimination. The issue has only grown more contentious as conservative courts continue to erode discrimination protection in favor of religious preferences. There’s certainly an argument to be made that religious organizations can focus on actual practitioners of their religion when hiring for important religious positions, such as priests or ministers. As illustrated by a recent petition for certiorari, however, the exception threatens to swallow the rule, giving religious organizations the freedom to engage in discriminating hiring practices all the way down to hourly workers who serve no religious function. Although the Supreme Court declined to hear the case for now, at least one justice left the door open for future challenges to question whether religious organizations can ever be limited by anti-discrimination laws.

The Ministerial Exception to Religious Discrimination

Title VII of the federal Civil Rights Act of 1964 prohibits discrimination against employees in the workplace based on a number of criteria including race, sex, and religion. There are limits to the law, however. Federal courts have found that the First Amendment guarantees employers the freedom to hire based on religious criteria under certain circumstances.

In 2012, the Supreme Court recognized a “ministerial exception” to prohibitions on employment discrimination. Under the ministerial exception, religious organizations are free to limit their hiring of ministers and other religious officials based on religious criteria. The Court found that the First Amendment guarantees religious organizations the right to operate in accordance with their faith without government interference. The exception is not absolute, however, applying only to employees who qualify as a “minister”–meaning someone who performs significant religious functions and satisfies certain other criteria.

The Court laid out several factors to determine whether a given employee counts as a “minister” but declined to establish a rigid test. The court reaffirmed the ministerial exception in 2020, in a case titled Our Lady of Guadalupe School v. Morrissey-Berru. The Court found that a person may satisfy the ministerial exception even if they do not hold a formal title or training of a religious leader if they otherwise serve significant religious functions. The Court emphasized that the First Amendment requires courts to “stay out of employment disputes involving those holding certain important positions with churches and other religious institutions.”

The lower courts have been a battleground for testing the limits of the ministerial exception. Advocates for employee rights argue that the exception should be kept narrow, applying only to those who truly serve an important religious function. Proponents of religious freedom argue that the exception should be interpreted broadly, if not expanded to essentially grant religious institutions the right to hire every single employee based on religious criteria–including discriminating against people whose conduct allegedly violates their tenets.

The case titled Seattle’s Union Gospel Mission v. Matthew Woods concerns an employment discrimination claim brought against a religious nonprofit under Washington State’s antidiscrimination laws. The plaintiff applied for a position with the mission’s legal aid clinic. During the hiring process, the plaintiff disclosed that he was in a same-sex relationship. The clinic’s director explained that the plaintiff’s sexual identity, the fact that he did not attend church, and that he did not share the mission’s religious goals meant he was not qualified for the position. He applied anyway and was rejected, after which he filed his lawsuit.

The organization argued that the law does not apply to them because it specifically excludes “any religious or sectarian organization not organized for private profit” from its definition of an employer. On appeal, the Washington Supreme Court refused to apply the state’s exemption for religious organizations, contending that to do otherwise would effectively give the organization a “license to discriminate.” They remanded for further proceedings, specifically to address whether the mission staff attorneys–the position for which the plaintiff had applied–counted as “ministers” for the purposes of the ministerial exception.

Because the case is still proceeding through the lower courts, the U.S. Supreme Court declined to hear the case. In an opinion concurring with the denial of cert, Justice Alito suggested that the state supreme court’s decision had set up an “inevitable” confrontation as to whether religious employers have the constitutional right to restrict hiring practices for all positions. He stated that “the day may soon come when we must decide whether the autonomy guaranteed by the First Amendment protects religious organizations’ freedom to hire co-religionists without state or judicial interference.” He went on to state that the “guarantee of church autonomy” is not restricted to “employment decisions regarding formal ministers.”

If Justice Alito’s view is held by the Court’s majority–which, at the moment, seems quite plausible–then a future opinion might declare that the so-called ministerial exception applies to all employees of religious organizations. The Court could even take up this exact case once it has been resolved. Employees around the country may then be forced to contend with religious employers’ “license to discriminate” as feared by the Washington court.

Based in Ocala, Florida, and representing employees throughout Central Florida, we have almost twenty years of experience representing employees who have been the victims of discrimination and harassment in the workplace. If you have been subjected to discrimination at work or have questions about your rights as an employee, please contact our office for a free consultation with our Marion County, Florida employment discrimination attorneys. Our employee rights law firm takes employment discrimination and harassment cases on a contingency fee basis. This means that there are no attorney’s fees incurred unless there is a recovery and our attorney’s fees come solely from the monetary award that you recover.