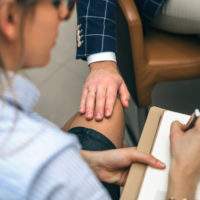 The alleged sexually harassing behavior by McWhite towards one female employee included sexual propositions, sexual remarks, telling her he took Viagra at work, remarks about her buttocks, touching her breasts and buttocks, demanding that she have sex with him in order to receive unpaid wages, and showing her pictures of naked women on a cell phone. The alleged sexually harassing behavior by McWhite towards another female employee included telling her to lift up her skirt, making sexual comments about customers’ bodies, and taking pictures of female customers’ buttocks. The three female employees also asserted that they heard McWhite sexually harass other female employees, including offering them money for sex, demanding sex from them, touching their breasts and buttocks, and making remarks about how he could be their boyfriend and pay their bills.

Moreover, if notice was required in order to hold a company liable for its owner’s harassing conduct, an owner could simply designate himself or herself as the person to whom sexual harassment complaints must be made. In fact, the complaint procedure maintained by McWhite Funeral Home required employees to report complaints of sexual harassment to McWhite. Thus, McWhite, the alleged sexual harasser, was the person who was responsible for investigating and taking corrective action on behalf of McWhite Funeral Home regarding allegations about his own sexually harassing behavior. Under such circumstances, requiring an employee to use the company’s complaint procedure for reporting sexual harassment as a perquisite for imposing liability would immunize the company from liability for the sexual behavior of its “alter ego” and undermine Title VII’s goal of eradicating sexual harassment in the workplace.