To Be Disabled Under The Americans With Disabilities Act, Must An Employee Be Unable To Work? 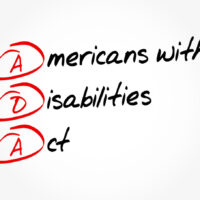 For more than twenty years, our Alachua County, Florida unlawful discharge lawyers have represented Florida employees who have been discriminated against on the basis of disability. Through their extensive experience representing victims of disability discrimination, our Gainesville, Florida unlawful discharge attorneys have learned that many employees believe they must be unable to work in order to be disabled within the meaning of the Americans with Disabilities Act (ADA). This belief, however, is a myth because employees are not required to establish they are unable to work in order to have a claim under the ADA.

Definition Of Disability Under ADA

The ADA prohibits an employer from discriminating against employees on the basis of disability in regard to job application procedures, the hiring, advancement, or discharge of employees, employee compensation, job training, and other conditions of employment. The ADA, in relevant part, defines a disability as a physical or mental impairment that substantially limits one or more major life activities. Major life activities include, but are not limited to, caring for oneself, performing manual tasks, seeing, hearing, eating, sleeping, walking, standing, lifting, bending, and working. Stated another way, if an employee has a physical or mental condition that substantially limits his or her ability to perform a major life activity, then the employee has a disability under the ADA.

In this article, our Alachua County, Florida unlawful discharge lawyers explain how the recent decision by the Sixth Circuit in

Case No. 19-1176 (6th Cir. Sept. 10, 2020) demonstrates that employees are not required to show an inability to work in order to establish they are disabled for purposes of the ADA.

In that case, Jacqueline Harrison (Harrison) brought an unlawful discharge lawsuit against her former employer, Parts Galore, LLC (Parts Galore), pursuant to the ADA. Harrison claims that Parts Galore violated the ADA by terminating her employment because of her disability.

In December 2015, Harrison was hired as a manager by Parts Galore, a self-service used auto parts salvage. At the facility managed by Harrison, customers pay an entrance fee which allows them to harvest and purchase parts from scrap cars located throughout many acres. Harrison inspected the yard two to three times a day on a John Deere tractor. As part of these inspections, she checked for improperly placed cares, monitored employees, and assessed holes in the fence to prevent theft.

In 2014, a new Regional Manager for Parts Galore mandated changes to Harrison’s duties. Among other things, he required Harrison to randomly spot-check five cars each day prior to their placement in the yard. This was to ensure that all dangerous car parts had been properly removed. To conduct the spot-checks, Harrison had to look under each car’s hood and ensure that all of the engine fluids had been drained, and then inspect beneath the vehicles to confirm the removal of catalytic converters. The latter duty required Harrison to kneel down and view the underbelly of the car.

Employee Fired Because Of Knee Injury

The new inspection procedure posed problems for Harrison because she had suffered a torn ACL in 2011. Knee surgery repaired her torn meniscus, but she elected not have her ACL repaired, as it would have required her to stop taking medication that she needed and her doctor informed her that she could function without the additional repair. However, she was no longer able to kneel down to look beneath the cars to perform the daily spot-check inspections.

To address Harrison’s inability to kneel, Parts Galore supplied her with a mirror on an extension arm, which she used to view the undercarriage of cars and confirm that the catalytic converter had been removed. The mirror allowed Harrison to perform all of her work-related duties without any limitation. Harrison never requested any other accommodation to perform her duties at Parts Galore. In fact, she testified that “there was no part of my job that I could not do.” On August 26, 2015, the Regional Manager informed Harrison that she was being terminated because she could no longer do her duties because of a torn ACL. The Regional Manager, according to Harrison, offered no other reason for her termination.

Not Required To Show An Inability To Work

The trial court, sitting in the U.S. District Court for the Eastern District of Michigan, dismissed Harrison’s wrongful discharge claim. In doing so, the trial court ruled that Harrison’s knee injury did not constitute a disability within the meaning of the ADA and thus she could be lawfully fired because of her inability to perform her job duties as a result of her knee injury. In other words, the trial court reasoned, Harrison was not protected against disability discrimination because her knee injury was not a disability under the ADA and therefore she could be lawfully fired for the reason articulated by Parts Galore. On appeal, the Sixth Circuit reversed the trial court’s decision and reinstated Harrison’s unlawful discharge claim.

At the outset of its opinion, the Sixth Circuit explained that employees “need not show” that their physical or mental impairment “renders [them] unable to work.” Because Harrison was not required to show an inability to work to qualify for protection against disability discrimination under the ADA, the threshold question, according to the appellate court, was whether Harrison’s physical impairment—her knee injury—constitutes a disability for purposes of the ADA because it substantially limits her ability to walk or kneel.