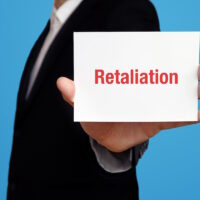 In that case, Michael Chambers (Chambers) brought a retaliation case against his former employers, the Commonwealth of Pennsylvania and the Pennsylvania State Police (PSP), pursuant to Title VII of the Civil Rights Act of 1964 (Title VII). Title VII protects employees from discrimination when they complain about perceived discrimination on the basis of race, color, national origin, sex, or religion in the workplace. Chambers claims that the PSP unlawfully retaliated against him for complaining about perceived discriminatory employment practices.

Chambers began working for the PSP in 1993. Chambers was promoted three times during his career with the PSP, most recently in 2012, when he was promoted to Sergeant. But after that, even though he was recommended for move to the next position in the chain of command, he was never promoted to Lieutenant. Chambers contends that the reason he was not promoted was because of his complaints of discrimination.

On February 6, 2017, Chambers filed an internal discrimination complaint. Five days after his complaint was filed, Chambers’ supervisor, Major Gray, declined to recommend Chambers for a promotion. Chambers further asserts that, one week after he filed the complaint, in retaliation for his doing so, the PSP scheduled him for a random drug test, despite the fact that he had never been subjected to a drug screening previously. Evidently, the drug test did not happen. In March 2017, according to Chambers, the PSP also placed him under surveillance.

Worker Repeatedly Passed Over For Promotion

In January 2018, Major Gray recommended four Sergeants for promotion and included Chambers as his fourth choice. Along with fourteen others, Major Gray’s first and second choices were promoted to Lieutenant the following month. In March 2018, after having been repeatedly passed over for promotion after lodging complaints of perceived discriminatory employment practices, Chambers retired from the PSP.