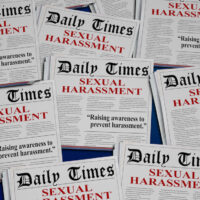 Having litigated sexual harassment cases for more than two decades, our Columbia County, Florida sexual harassment lawyers know that a sexual harasser’s direct contact with an intimate body part is one of the most egregious forms of sexual harassment. As explained by the U.S. Second Circuit Court of Appeals in Redd v. New York Div. of Parole,  678 F.3d 166 (2d Cir. 2012), “when entering a workplace reasonable people expect to have their autonomy circumscribed in a number of ways; but giving up control over who can touch their bodies is usually not one of them.” In this article, our Lake City, Florida sexual harassment attorneys explain how the decision by the U.S. District Court for the Eastern District of New York in Dillon v. Ned Management, Inc., 85 F.Supp.3d 639 (E.D. N.Y. 2015) demonstrates that a single incident of contact with a victim’s intimate body part is sufficient to create a sexual hostile work environment.

In that case, Michal Dillon (Dillon) brought a sexual harassment lawsuit against her former employer, Ned Management, Inc. (Ned Management), pursuant to Title VII of the Civil Rights Act of 1964 (Title VII). Title VII protects employees from unwanted sexually harassing behavior in the workplace. Dillon contends that she was subjected to sexual harassment which was sufficiently severe to alter the conditions of her employment and create a hostile work environment in violation of Title VII.

Ned Management provides management organization services for doctors. In February 2012, Dillon was hired by Ned Management to perform the duties of secretary and front desk attendant. Her first six months of employment were without incident or complaint; no problems arose with respect to her work environment or her co-workers. In August 2012, Dillon’s work environment abruptly changed. On August 17, 2012, while delivering paperwork to her supervisor, a man named Friedman, outside of the building where she worked, Friedman made a remark about Dillon’s breasts and then—offering her cash—asked if he could “see them.” Shocked, Dillon responded, “Have a good day,” abruptly leaving.

Five days later, on August 22, 2012, Friedman approached Dillon again. This time, he told her to show him her office. She complied. Entering the hallway, Friedman waived four $100 bills in her face saying: “I know you need some extra cash . . . This could be yours.” Trying to brush off the second unwelcome sexual advance, Dillon rushed back to the front desk.

For the rest of August 2012 through September 2012, Dillon had no further uncomfortable exchanges with Friedman. Then on October 1, 2012, Friedman requested Dillon’s help unloading his car with paperwork to be transported to another Ned Management facility. As she was placing the paperwork on the floor of the backseat of Friedman’s car, Friedman grabbed her buttock. Standing up, Dillon stared at Friedman. Neither exchanged a word. On her walk back to the office, Dillon started crying. That same day, despite her fear that lodging a complaint would put her job at risk, Dillon informed another supervisor about Friedman’s unwanted sexual behavior. Nine days later, on October 10, 2020, Dillon was fired. According to Dillon, her firing went unexplained as management told her only that she was “too much trouble.”

Ned Management filed a motion with the trial court seeking dismissal of Dillon’s sexual harassment claim. In doing so, Ned Management argued that the sexual behavior Dillon allegedly endured was not sufficiently severe or pervasive to create an abusive work environment in violation of Title VII. The trial court denied Ned Management’s motion for dismissal and ruled that Dillon’s Title VII sexual hostile work environment claim would be tried before a jury.