What Is The Legal Significance Of A Prior Complaint Against A Sexual Harasser? 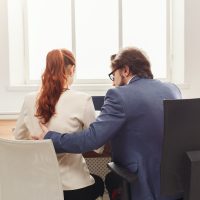 Title VII of the Civil Rights Act of 1964 (Title VII) prohibits employers from discriminating against employees on the basis of sex. In construing Title VII, courts have ruled that sexual harassment is a form of sex discrimination forbidden by Title VII. To violate Title VII, sexual harassment must be sufficiently severe or pervasive to alter the conditions of the victim’s employment and create a hostile working environment.

As observed by the court in Curry v. District of Columbia,  195 F.3d 654 (D.C. Cir. 1999), “Title VII does not permit employers to stand idly by once they learn that sexual harassment has occurred.” Rather, once an employer knows or should know of sexual harassment in the workplace, a remedial obligation is triggered. The employer is obligated by Title VII to take prompt and effective remedial action that is reasonably calculated to end the harassment. “The reasonableness of the remedy,” as court in Nichols v. Azteca Restaurant Enterprises, Inc., 256 F.3d 864 (9th Cir. 2001) explained, “depends on its ability to: (1) stop harassment by the person who engaged in harassment, and (2) persuade potential harassers to refrain from unlawful conduct.” When an employer is aware of the harassment and takes no remedial action, or the remedial action taken does not prevent recurrence of the harassment, the employer is liable under Title VII for maintaining a sexually hostile work environment.

Prior Complaints Against Same Harasser

Schmidt was employed by Braun from July 2010 until she quit in May 2011. During Schmidt’s employment, a woman named Miller was also employed by Braun. In August 2010, an anonymous male caller complained to Braun’s Human Resources Manager, Wood, that a supervisor, Robertson, was making sexual comments to Miller. Wood contacted Miller as a result of the complaint and met with her. Miller informed Wood that Robertson regularly made sexual comments and sexual propositions to her and to other female employees. During Miller’s meeting with Wood, Wood told Miler that Robertson was “an old school old field” and that Miller should not take any offense.

After meeting with Miller, Wood contacted Braun’s Vice President, Reed, and they decided to write Robertson up and give him a warning. Reed summoned Robertson and they met with Wood. During the meeting, Robertson received a written “Discipline Action Form” in his file and was counseled verbally that further harassing conduct could lead to greater discipline. Robertson admitted to making sexual comments to Miller. After signing his write-up, Robertson slammed his fist into Wood’s desk and stated “I’ll never come back to your office. I’ll be a good boy.”

Another Complaint Against Same Harasser

Schmidt was transferred to Robertson’s supervision in September 2010. Pursuant to her resignation from Braun, her last day of employment was May 13, 2011. On her last day, Schmidt met with Wood for her exit interview. Schmidt informed Wood that Robertson sexually harassed her during her employment at Braun, including subjecting her to sexual comments and sexual propositions. Wood told Schmidt that Roberts was “old school oil field” and that was just the way he is.

After Schmidt’s exit interview and resignation, Wood interviewed Miller regarding Schmidt’s complaint about Robertson. Miller felt threatened by Wood during the interview and told Wood that nothing had been done by Braun after she asked for help. The EEOC claims that Wood then told Miller there was nothing she could do for Miller and that “this better not turn into a lawsuit.” Braun terminated Robertson’s employment shortly after Schmidt’s complaint to Wood.

Braun filed a motion with the trial court seeking the dismissal of Schmidt’s sexual harassment claim. In support of its motion for dismissal, arguing that it was not liable for any sexually harassing behavior by Robertson against Schmidt because it lacked notice of the conduct until Schmidt lodged a complaint during her exit interview. In other words, Braun claimed that its liability, if any, for Robertson’s sexual harassment of Schmidt ran only from the time it knew of the conduct and failed to stop it. The trial court denied Braun’s motion for dismissal and ruled that Schmidt was entitled to proceed to a jury trial on the issue of whether Braun maintained a sexually hostile work environment in violation of Title VII.

In denying Braun’s motion for dismissal, the trial court focused on Braun’s failure to remedy the situation of Robertson as a sexual harasser and stop Robertson from engaging in sexual harassment. The trial court observed that before Robertson allegedly sexually harassed Schmidt, Miller had lodged a sexual harassment complaint against Robertson. Following the complaint, “Wood met with Miller once for about twenty minutes, and, after Miller confirmed the harassment, Wood told her that Robertson was ‘old school oil field’ and not to take offense from his improper sexual conduct.” Although Wood verbally counseled Robertson against further harassment and placed a disciplinary action form in his file, “Robertson’s employment was not affected in any way until Schmidt’s formal complaint and resignation in May 2011.”

The trial court also pointed out that after “Wood instructed Robertson to refrain from contacting Miller about the complaint, Miller informed Wood that Robertson pulled her outside and confronted her about the complaint.” Despite this, the trial court noted “Braun continued to place Miller under Robertson’s supervision.” Thus, the trial court determined that “Braun’s handling of Robertson’s harassment failed to stop the harassment by the person who engaged in harassment and did little if anything to persuade potential harassers to refrain from unlawful conduct.” Rather, the trial court concluded, the “evidence suggests that Braun’s inadequate action may have emboldened the harasser to continue his misconduct.”