What Is The Legal Significance Of Prior Complaints Against The Same Sexual Harasser? 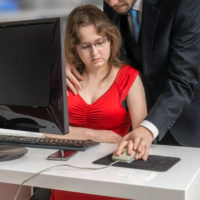 When an employer knows or should know about sexually harassing conduct in the workplace, the employer is required by Title VII of the Civil Rights Act (Title VII) to take prompt and appropriate remedial action to prevent recurrence of the harassment. Generally, an employer receives notice of a harasser’s sexually harassing behavior in the form of a complaint from the victim. However, as explained by the U.S. Eighth Circuit Court of Appeals in Sims v. Health Midwest Physician Services Corp., 196 F.3d 915, 920 (8th Cir. 1999), “notification of sexual harassment to an employer need not come solely from the victim of the harassment for knowledge to be imputed to the employer.” Rather, as pointed out by the U.S. First Circuit Court of Appeals in Gray v. Genlyte Group, Inc., 289 F.3d 128 (1st Cir. 2002), once an employer receives “notice” of the harasser’s sexual harassing behavior and “fail[s] to act,” the employer “could easily become responsible for later harassment not specifically reported to it.” As determined by the U.S. Eleventh Circuit Court of Appeals in Dees v. World Services, Inc., 168 F.3d 417 (11th Cir. 1999), “prior complaints about the same harasser may show an employer’s knowledge or “lack of reasonable care” in correcting the sexual harassment.

Prior Complaints Against Same Sexual Harasser: A Case Study

In reaching its conclusion, the court stated that imposing a duty on an employer to prevent further harassment by the same harasser against one employee when the employer has notice of prior harassment by the same harasser against other employees “is a logical comprehension” of Title VII of the Civil Rights Act. In stressing that a “contrary reading [of Title VII] would allow an employer to “absolve itself of liability by simply removing a harasser from contact with any number of female employee victims,” the court explained that:

In other words, Mr. X could harass Ms. A. If Ms. A then complained to the employer, then the employer could simply remove Mr. X from Ms. A’s working environment and place him in a different environment with, for example, Ms. B. To say that the employer owes no duty to prevent Ms. B from being harassed contravenes the public policy and goals behind Title VII.

Other courts have reached similar conclusions. Echoing the reasoning in Munn, the court in Nichols v. Wal-Mart Stores, Inc., 1997 WL 33147702 (M.D. Fla. March 26, 1997) the court rejected the employer’s argument that it took appropriate remedial action after the victim complained about sexual harassment because the employer had received prior complaints about the same harasser. The court reasoned that “the fact that the [victim] was harassed by [the same harasser] demonstrates that appropriate remedial action was not taken.” Plainly reinforcing the holding in Munn, the court in Brooks v. H.J. Russell & Co., 66 F.Supp.2d 1349 (N.D. Ga. 1999) concluded that it was for the jury to decide whether the employer took prompt remedial action by terminating the harasser after the victim complained about his sexually harassing behavior because the employer had received a prior complaint about the harasser long before the sexually harassing behavior against the victim occurred. The court reasoned that a jury could find that the employer knew before the subsequent harassment of the victim hat the harasser engaged in sexual harassment against others and failed to take appropriate remedial action to stop his sexually harassing behavior. Thus, as explained by the court in Petcou v. C.H. Robinson Worldwide, Inc., 2008 WL 8910651 (N.D. Ga. Feb. 5, 2008), “[a]n employer who should have anticipated that the [employee] would become a victim of sexual harassment in the workplace and yet failed to take action reasonably calculated to prevent such harassment is liable for the harassment under Title VII.”

We have extensive experience protecting and vindicating the rights of sexual harassment victims. If you have been the victim of sexual harassment, or have questions about an employer’s obligation to take prompt and effective remedial action after receiving notice of sexually harassing behavior in the workplace, please contact our office for a free consultation.