What Must Employers Do In Response To Sexual Harassment Complaints? 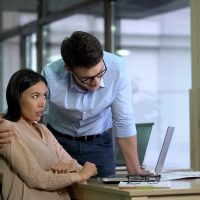 Title VII of the Civil Rights Act of 1964 (Title VII) prohibits employers from discriminating against employees based on sex with respect to compensation, terms, conditions, or privileges of employment. Discrimination based on sex that creates a hostile working environment is prohibited by Title VII. To violate Title VII, sexual harassment must be sufficiently severe or pervasive to alter the conditions of the victim’s employment and create a hostile work environment.

In Strobel, a woman named Strobel brought a sexual harassment lawsuit against her former employer, Westfield State University (Westfield), pursuant to Title VII of the Civil Rights Act of 1964 (Title VII). Strobel claims that Westfield violated Title VII by failing to respond promptly and appropriately to her complaint about sexual harassment by a co-worker.

Strobel was employed by Westfield as a maintainer for sixteen years. In July 2018, according to Strobel, a female co-worker grabbed her buttocks “in a sexual manner.” About eleven days later, the same employee grabbed Strobel’s buttocks “in a sexual manner.” In August 2018, Strobel made a sexual harassment complaint to Westfield. At some point, Strobel learned that the same employee had previously grabbed another employee’s breast. Strobel claims that Westfield was aware of the incident.

After several months of silence and apparent inaction, Strobel hired an attorney who contacted Westfield’s Vice President of Human Resources to inquire about the status of Strobel’s complaint. In March 2019, seven months after Strobel made her sexual harassment complaint, she received a letter from Westfield admitting that a violation had occurred. However, Westfield did not inform Strobel of any remedial action it had taken or would take in the future. Two days later, Westfield notified Strobel that the perpetrator was given a minimal suspension and required to participate in discrimination and harassment prevention training. Strobel’s attorney filed an appeal based on Westfield’s delay in conducting the investigation and the “lack of resolve in the consequences of the perpetrator.” Westfield stood by its decision.

Delay In Responding To Complaint

In denying Westfield’s motion for dismissal, the trial court focused on the lengthy delay in responding to Strobel’s sexual harassment complaint. The trial court observed that Westfield allegedly took “no action to address the alleged harasser’s conduct until [Strobel’s] attorney contacted [Westfield] some seven months after her internal complaint.” “Even then,” the trial court pointed out, Westfield “allegedly failed to disclose the remedial action it took or the steps it would take to prevent a recurrence of the employee’s harassment of [Strobel].” Thus, the seven-month delay in responding to Strobel’s sexual harassment complaint was evidence establishing that Westfield failed to effectively act promptly in response to her sexual harassment complaint. The trial court also noted that Westfield’s “delay in responding to” Strobel’s complaint, “which suggests a reluctance to address a problem in the workplace, lends some credence to [Strobel’s] belief that [Westfield] was on notice of the risk to co-workers posed by her assailant and failed to take appropriate remedial measures when first notified about the employee’s misconduct.”