What Types Of Evidence Prove That An Employee Was Harassed Because Of His Or Her National Origin? 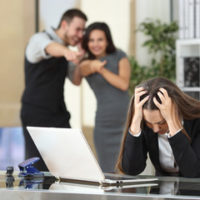 In that case, Enio Rivera (Rivera), a Hispanic of Puerto Rican descent, claimed that he was subjected to hostile work environment harassment based on national origin in violation of Title VII. Rivera was an employee of Lift Line, Inc. (Lift Line), a subsidiary of Rochester Genesee Regional Transportation Authority (RGRTA). Rivera worked for Lift Line as a bus driver.

During Rivera’s employment, an employee named Folino began an affair with Rivera’s then-wife. Rivera and his wife divorced after Rivera learned of the affair. Folino then married Rivera’s ex-wife. The affair created antagonism between Rivera and Folino at work. After the divorce, Rivera claimed that Folino began subjecting him to harassment based on his national origin, including calling him a “spic” twice and “Taco Bell” at least five times. Rivera also produced evidence that Folino referred to him as a “spic” outside of his presence on at least one occasion. Rivera further claimed that Folino and several other employees regularly harassed and bullied him in the workplace, but without using ethnic slurs. For example, Rivera alleged that he was subjected to cursing, physical confrontation, and tampering with his time card slot.

National Origin Need Not Be The Only Motivating Factor

The Second Circuit found that Rivera had produced sufficient evidence to establish that he was harassed based on his national origin and in a manner that interfered with his ability to do the job. Unlike the reversed trial court, the appellate court observed that Rivera was not “required to demonstrate that his national origin was the only motivating factor” for the abuse he endured. Rather, the appellate court explained, Rivera “needed to show only that a reasonable fact finder could conclude that [ ] national origin was a motivating factor in the harassment.” In applying these principles, the appellate court found that there was “enough evidence—both the use of ethnic slurs and the broader bullying and physical harassment—from which a reasonable jury could find that Folino harassed Rivera not merely because of their personal history, but also because Rivera was Puerto Rican.”

Based in Ocala, Florida and representing employees throughout Central Florida, we have substantial experience litigating hostile work environment harassment cases, including cases involving national origin harassment. If you have been the victim of an abusive work environment or have questions about being subjected to ethnic or racial slurs in the workplace, please contact our office for a free consultation with our Citrus County, Florida national origin discrimination lawyers. Our employee rights law firm takes national origin discrimination cases on a contingency fee basis. This means that there are no attorney’s fees incurred unless there is a recovery and our attorney’s fees come solely from the monetary award that you recover.