Why Do Employers Try To Get Employees To Quit? 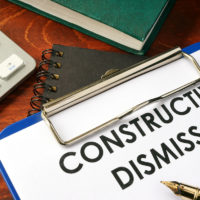 As the U.S. Seventh Circuit Court of Appeals explained in Boumehdi v. Plastag Holdings, LLC, 489 F.3d 781 (7th Cir. 2007), courts have “set a high bar for constructive discharge claims.” Before finding a constructive discharge, as observed by the U.S. Eleventh Circuit Court of Appeals in Hill v. Winn-Dixie Stores, Inc., 934 F.2d 1518 (11th Cir. 1991), courts “traditionally require a high degree of deterioration in an employee’s working conditions, approaching the level of intolerable.” As the First Circuit stated in Lee-Crespo v. Schering-Plough Del. Caribe Inc., 354 F.3d 34 (1st Cir. 2003), “it is not enough that an [employee] suffered the ordinary slings and arrows that workers routinely encounter in a hard, cold world.”

To prove a constructive discharge claim, an employee must also demonstrate that he or she gave the employer a reasonable opportunity to correct the problem. As pointed out by the U.S. Eighth Circuit Court of Appeals in Howard v. Burns Bros., Inc., 149 F.3d 835 (8th Cir. 1998), “if an employee quits without giving her employer a reasonable chance to work out a problem, then she has not been constructively discharged.”

Employers Believe Employees Will Not Get Over High Bar

Having forced an employee to quit, employers also recognize that the employee will then have to satisfy the high standard for a constructive discharge claim in order to establish the requisite adverse employment action element of a prima facie case. As courts are extremely reluctant to find an employee’s working conditions so intolerable that a reasonable person in the employee’s shoes would have been compelled to resign, employers know that employees generally will not meet their burden of proving a constructive discharge. The recent decision by the U.S. District Court for the Eastern District of Pennsylvania in Johnson v. Keystone Quality Transport Co., 2018 WL 558466 (E.D. Pa. Jan. 25, 2018) is instructive in showing that employers try to defeat discrimination and retaliation claims by arguing that the employee never suffered an adverse employment action because he or she quit.

In that case, Pamela Johnson (Johnson) filed an action against her former employer, Keystone Quality Transport Company (Keystone), claiming that she was subjected to hostile work environment sexual harassment and retaliation in violation of Title VII of the Civil Rights Act of 1964 (Title VII). Johnson worked as a part-time driver for Keystone, a medical transport company.

Johnson alleged that she was sexually harassed by her supervisor throughout the course of her three-month employment with Keystone. Johnson asserted that the harassment escalated over the course of time, starting with verbal harassment that eventually led to the supervisor sending her sexually explicit photos and physically assaulting her. Johnson claimed that she complained to management about the sexual behavior, but management did not respond promptly and reasonably, though they fired the supervisor for sending Johnson explicit photos. Johnson further maintained that she was retaliated against after complaining about the supervisor’s sexual conduct. She alleged that co-workers became hostile, management attempted to transfer her to a less desirable location, she was temporarily suspended under false pretenses, and she was ultimately fired.

Keystone filed a motion with the trial court seeking dismissal of Johnson’s retaliation claim. In its motion for dismissal, Keystone argued that Johnson was not fired, but rather, she quit by voluntarily abandoning her job. Because she quit, Keystone argued, Johnson did not suffer an adverse employment action. In the absence of an adverse employment action, Keystone contended, Johnson could not establish a prima facie case of retaliation and her retaliation claim must be dismissed.

Based in Ocala, Florida and representing employees throughout Central Florida, we have almost twenty years of experience litigating employment law cases. If you have questions about an employer taking actions intended to make you quit and about your legal options under such circumstances, please contact our office for a free consultation with out Marion County, Florida employment law attorneys. Our employee rights law firm takes employment law cases on a contingency fee basis. This means that there are no attorney’s fees incurred unless there is a recovery and our attorney’s fees come solely from the monetary award that you recover.