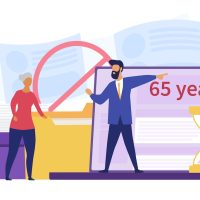 In that case, a man named Turner brought an age discrimination lawsuit against his former employer, Concours Mold Alabama, Inc. (Concours), under the Age Discrimination in Employment Act (ADEA). The ADEA prohibits employers from discriminating against employees on the basis of age. Turner claims that Concours violated the ADEA by terminating his employment because of his age. Turner was sixty-one years old at the time of his discharge.

In February 2017, Concours hired Turner as a business development manager. Concours designs, manufactures, and services plastic injection molds. As business development manager, Turner was responsible for bringing in sales related to repairs and engineering changes as opposed to sales related to new builds. Turner reported to Ergun and Rocks. While Turner’s supervisor, Rocks reassigned some of Turner’s accounts to younger employees. Turner claims that younger salespersons did not have their accounts reassigned. Turner further claims that younger salespersons received raises while he did not. The ages of the other salespersons were 40, 36, and 34.

In August 2019, the company’s president asked management to make employee termination recommendations. Both Rocks and Ergun recommended Turner’s termination. On August 30, 2019, human resources notified Turner that his employment was terminated due to organizational restructuring. On the same day, Ergun informed other salespersons via email that Turner had been fired due to a reduction in force, and Turner was chosen for the reduction in force based on his performance/numbers. After Turner’s discharge, Concours hired three new salespersons.

Concours filed a motion with the trial court seeking dismissal of Turner’s age discrimination claim. In support of its motion for dismissal, Concours argued that Turner was terminated for a legitimate, non-discriminatory reason—a reduction in force. The trial court denied Concours’ motion for dismissal and ruled that Turner had presented sufficient evidence to establish that he was fired because of his age in violation of the ADEA to proceed to a jury trial.

In denying Concours’ motion for dismissal, the trial court focused on the explanation proffered by Concours for including Turner in the reduction in force. According to Concours, the trial court pointed out, Turner was chosen for the reduction force based strictly on his performance/numbers. In evaluating whether the proffered explanation for including Turner in the reduction in force was the true reason for his termination, the trial court found that Turner produced evidence rebutting Concours’ assertion that Turner was the salesperson with the lowest performance. When responding to Turner’s allegation of age discrimination to the U.S. Equal Employment Opportunity Commission (EEOC), the trial court noted, Concours submitted sales information showing that Turner’s performance was well below other salespersons. However, the trial court explained, “when reviewing the complete sales information for 2019 provided by Concours, which was not provided to the EEOC, it becomes clear that through the end of August 2019, Turner did not have the lowest overall sales.” Thus, Turner “was not the salesperson with the lowest performance as Concours attempted to show.”

In showing that he did not have the lowest sales performance at the time of his termination in August 2019, the trial court reasoned, Turner demonstrated that Concours’ assertion that his termination was based “strictly on his performance” was false. Because Turner produced evidence showing that Concours’ articulated explanation for including him in the reduction in force was false, the trial court concluded that a jury could reasonably find that Turner’s age was the real reason he was chosen for the reduction in force.

When seeking to protect their employee rights, one of the most important decisions employees must make is deciding which employment law attorneys to consult regarding their workplace issues. At our employee rights law firm, an experienced employment law attorney will speak with you personally and you will receive the individualized attention your case deserves. We provide employees with free confidential case evaluations and employees do not have to pay to speak with our employment law attorneys regarding their workplace issues. We are available for consultation at your convenience and are able to schedule telephone consultations for evenings and weekends.