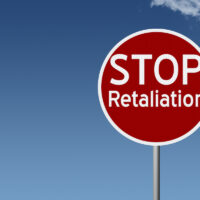 For the past two decades, our Alachua County, Florida lawyers for retaliation victims have fought for the rights of Florida employees who have been retaliated against for complaining about race discrimination in the workplace. Through their extensive experience litigating retaliation claims in Florida courts, our Gainesville, Florida attorneys for retaliation victims know that employers often defend retaliatory discharge cases by claiming that the employee was fired because of a history of unsatisfactory or unprofessional behavior. Under such circumstances, the discharged employee can establish that retaliation was the real reason for the employer’s termination decision by pointing to evidence showing a work history inconsistent with an employee who repeatedly exhibits unsatisfactory or unprofessional behavior. Such evidence would include positive employee evaluations, promotion, increases in pay, and a lack of written disciplinary action. In this article, our Alachua County, Florida lawyers for retaliation victims explain how the decision by the U.S. District Court for the Eastern District of Michigan in Johns-Griggs v. A123 Systems, LLC,  Case No. 4:19-cv-11162 (E.D. Mich. Jan. 13, 2021) illustrates that such evidence is highly persuasive in proving a retaliatory discharge case.

Johns-Griggs’ retaliation claim arises out of his firing from A123 on February 6, 2019. Two days before his termination, Johns-Griggs had a confrontation with an A123 employee named Thompson. Johns-Griggs says on that day, he walked in to a room where Thompson was seated at a desk. Nobody else was in the room at the time. When Johns-Griggs asked Thompson if Thompson had recently seen another A123 employee, Thompson “blew up” and began accosting Johns-Griggs. According to Johns-Griggs, Thompson rose from his desk, came “within two or three feet away” from Johns-Griggs, turned “red in the face,” and began “screaming.” Thompson yelled, Johns-Griggs maintains, racial slurs at him. Thompson’s diatribe “went on for like five minutes.” Ultimately, Johns-Griggs left the room.

A123 filed a motion with the trial court seeking dismissal of Johns-Griggs’ retaliatory termination claim. In doing so, A123 maintained that Johns-Griggs could not establish that the proffered reason for his termination was false and that retaliation was the real reason for his termination. The trial court denied A123’s motion for dismissal and ruled that it was for a jury to decide whether Johns-Griggs was fired in retaliation for complaining about the racial hostilities directed towards him by one of the company’s employees.

In denying A123’s motion for dismissal, the trial court observed that Johns-Griggs was fired just two days after he filed his race discrimination complaint with human resources. The “closeness in time” between Johns-Griggs race discrimination complaint and the termination of his employment, the trial court determined, “is sufficient, standing alone,” to establish a causal connection between the two events. This “closeness in time” the trial also noted, was evidence of a retaliatory motive.

Based in Ocala, Florida and representing employees throughout Central Florida, our Alachua County, Florida attorneys for retaliation victims have litigated retaliatory termination cases in Florida courts for more than two decades. If you have been fired in retaliation for exercising your employee rights or have questions about your protection from retaliation under the federal employment laws, please contact our office for a free consultation with our Gainesville, Florida lawyers for retaliation victims. Our employment and labor law attorneys take retaliation and wrongful discharge cases cases on a contingency fee basis. This means that there are no attorney’s fees incurred unless there is a recovery and our attorney’s fees come solely from the monetary award that you recover.