Both Men And Women Are Protected From Sexual Harassment At Work 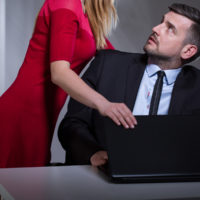 Title VII of the Civil Rights Act of 1964 (Title VII) makes sexual harassment which is sufficiently severe or pervasive to alter the terms and conditions of the victim’s employment and create a hostile work environment unlawful. Having litigated sexual harassment cases for more than 15 years, our Central Florida sexual harassment attorneys have learned that a common myth associated with sexual harassment is that women are allowed to engage in sexual behavior towards men in the workplace. The decision by U.S. District Court for the Eastern District of New York in Garcia v. College of Staten Island, 2015 WL 1273468 (E.D. N.Y. Jan. 6, 2015) illustrates that men are protected from sexual harassment by women.

Alleged Harasser Claims She Can Because She Is A Woman

After the co-worker’s alleged behavior occurred, Garcia claimed that he made a sexual harassment complaint to the Associate Director of Human Resources. Approximately three weeks after he reported the co-worker’s behavior to the Associate Director of Human Resources, Garcia purportedly made offensive and insubordinate comments about the Vice-President of CUNY and other officers assigned to the Public Safety Office. That same day, CUNY commenced an investigation regarding Garcia’s alleged behavior. During the course of the investigation, Garcia claimed that the co-worker told him that she was testifying against him because of his sexual harassment complaint. At the conclusion of the investigation, CUNY found that the allegations against Garcia were substantiated and suspended Garcia for 30 days without pay.

Employer Did Nothing About The Harassment

In denying CUNY’s attempt to dismiss Garcia’s sexual harassment claim, the trial court observed that while isolated incidents of physical contact with the victim “constitute close questions” as to a work environment is sufficiently hostile to get the case to a jury, courts have nonetheless held that “even a single episode of harassment can establish a hostile work environment if the incident is sufficiently severe.” The trial court determined that a reasonable jury could find that the co-worker’s alleged behavior was sufficiently severe or pervasive to alter the conditions of Garcia’s employment and create an abusive working environment.

The trial court further found that Garcia had produced sufficient evidence establishing that CUNY could be held liable for the hostile work environment sexual harassment. The trial court determined that a reasonable jury could find that the Associate Director of Human Resources “had actual knowledge of the sexual harassment, and as Associate Director of [Human Resources], was charged with a duty to act on this knowledge and stop the alleged harassment, which she failed to do.” Thus, the trial court held, there was a “sufficient basis upon which a reasonable jury could impute liability to [CUNY], because [it] knew of the harassment but did nothing about it.”