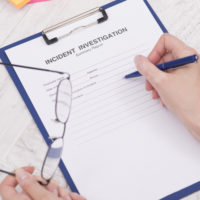 Dragon alleged that the racial harassing behavior included referring to an inmate with a racial slur, instructing her not to speak Spanish at work pursuant to an unwritten practice of which she was never previously informed, denying her training, and denying her promotion. Dragon also claimed that non-Hispanic judicial marshals were angry when she was ultimately promoted to Lead Judicial Marshal, and they tried to sabotage her because of their displeasure at having a female Hispanic supervisor by giving her the “silent treatment” and disregarding her orders. According to Dragon, one judicial marshal told her that she was promoted only because she is Puerto Rican. Dragon claimed that the sexually harassing behavior included a sexual proposition, sexual innuendos, and remarks about her breasts.

Dragon further alleged that the hostile work environment harassment involved attempts to get her fired. After she attempted to write up a non-Hispanic subordinate employee for misconduct, the employee filed a complaint against Dragon with the Human Resources Department. The employee claimed that Dragon, who had undergone cosmetic breast surgery, displayed before and after photos of her bare breasts to her and other court personnel. Although Dragon told the Human Resources investigator that the alleged incident was a fabrication, he substantiated the complaint against her and issued her a written warning.

Employers Have A Duty To Thoroughly Investigate

After determining that a reasonable jury could find that Dragon was subjected to sufficiently severe and pervasive abuse on the basis of race and sex to create a hostile work environment, the trial court addressed the issue of whether the Defendants could be held liable for the hostile work environment. The trial court noted that the Human Resources Department had long been aware of Dragon’s complaints that she was the target of abusive behavior by non-Hispanic subordinate employees because they were unhappy with her promotion because she is a woman and Hispanic, including her allegation that they created a rumor about her breast enhancement surgery to get her fired. Despite such knowledge, the Human Resources Department disciplined Dragon “instead of thoroughly investigating her complaint that the story was a fabrication.”

Based in Ocala, Florida and representing employees throughout Central Florida, we have more than fifteen years of experience representing employees who have been the victim of racial and sexual harassment in the workplace. If you have been the victim of racial or sexual harassment, please contact our office for a free consultation with our Central Florida hostile work environment harassment attorneys. Our employee rights law firm takes racial and sexual harassment cases on a contingency fee basis. This means that there are no attorney’s fees incurred unless there is a recovery and our attorney’s fees come solely from the monetary award that you recover.