Does An Employer’s Use Of Code Words For Age Constitute Evidence Of Age Discrimination? 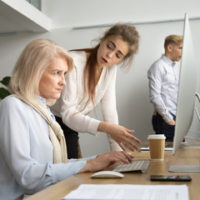 Too Much Experience Means Inflexibility

In that case, Charles Owen (Owen) sued Stmicrolectronics, Inc. (STM) pursuant to the Age Discrimination in Employment Act (ADEA). Owen claimed that STM failed to hire him because of his age in violation of the ADEA. Owen began working for STM in 2007. STM hired him on a temporary basis to perform in-house counsel duties while the employee who normally fulfilled those duties was on an assignment in China. Owen’s duties included drafting and negotiating commercial contracts, licensing agreements, technology agreements, and real estate leases. Owen was also responsible for reviewing non-disclosure agreements. Owen’s position ended when the employee returned from China.

In April 2013, an employee named Quill, who worked in STM’s human resources department, contacted Owen about returning to the company. STM was seeking a temporary employee to review non-disclosure agreements because the paralegal normally responsible for those duties had left STM. Owen accepted the position and primarily worked with an employee named Blanchard.

That same year, Owen learned that a full-time, permanent corporate counsel position (the Senior Position) had opened up. Owen expressed interest in the Senior Position to Quill, STM’s General Counsel, and Blanchard. STM’s General Counsel notified Owen that Blanchard would be the ultimate decision-maker. Blanchard told Owen that, although he was “extremely qualified” for the job, STM did not want “someone with so much experience that they would be inflexible.”

Blanchard drafted the posted job advertisement for the Senior Position, which stated that “the right candidate will have strong academic and employment credentials,” and that big firm and in-house counsel experience was “preferred.” Ultimately, STM did not select Owen for the Senior Position. Instead, STM selected an individual who was 36 years old. Owen was 64 years old when he sought and was rejected for the Senior Position. Soon thereafter, Owen’s position at STM was eliminated because the legal department was fully staffed.

Code For Employee Being Too Old

The trial court found that a jury could reasonably conclude that STM did not hire Owen for the Senior Position because of his age based on the comment Blanchard allegedly made to him while discussing Owen’s interest in the position. The trial court explained that a “reasonable juror could find Blanchard’s comment about experience and inflexibility to be indicative of age discrimination.” In other words, the trial court observed, a reasonable jury could agree with Owen that Blanchard’s comment “was simply code for Owen being too old.”

The trial court also determined that a reasonable jury could find that STM’s proffered reasons for not hiring Owen for the Senior Position were a pretext for age discrimination because they were “false or unworthy of credence.” Although STM asserted that it did not hire Owen for the Senior Position because his performance when reviewing non-disclosure agreements was not satisfactory and, thus, he was not qualified for the position, the trial court observed that Owen claimed that “neither this nor any other criticism was communicated to him” during his tenure with STM. The trial court also pointed out that STM chose to hire Owen again after he worked for the company for a year in a position extremely similar to the one for which STM failed to hire him. Consequently, the trial court concluded that resolution of Owen’s age discrimination claim was “more appropriate under the heat of trial and the bright light of cross-examination.”