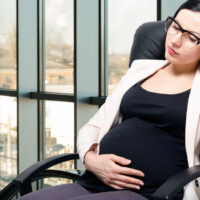 In this article, our Ocala, Florida pregnancy discrimination lawyers explain how the decision in May v. PNC Bank, Case No. 18-2933 (E.D. Pa. Jan. 22, 2020) illustrates that an employer’s disparaging remarks about a pregnant employee’s need to take leave for medical appointments may be used to prove that the employee was fired because of her pregnancy. In that case, May Jo May (May) brought a pregnancy discrimination lawsuit against her former employer, PNC Bank, pursuant to the PDA. May claims that PNC violated the PDA by firing because of her pregnancy. May’s employment with PNC Bank began in 2009 when she was hired as a bank teller. In 2016, May became the branch manager at PNC Bank’s branch in Morrisville, Pennsylvania. In June 2017, May notified her supervisor, a regional manager named DiSandro, that she was pregnant. May also told DiSandro that she would need to attend blood work and other doctors’ appointments because of her pregnancy. From June 2017 until her termination in September 2017, May attended these medical appointments.

May testified that from the day she told DiSandro about her pregnancy until the day she was fired, DiSandro daily complained that it was inconvenient to have a manager out, and he inquired into how frequently and for how long May would need time off. May further testified that DiSandro stated that the branch needed leadership and management and asked how May would ensure the branch’s success in her absence. In late July 2017, according to May, DiSandro stated that the Marrisville branch may need to close for lack of production. These comments, May testified, were made in direct response to her notices to DiSandro of time she needed off to manage her pregnancy-related medical issues.

On August 11, 2017, May requested that her subordinate seek a refund on her joint account on which here husband was the primary user. On September 19, 2017, PNC Bank fired May for allegedly violating PNC Bank’s Code of Ethics by misusing her position and authority by instructing her subordinate to refund fees on her joint account. DiSandro testified that he made the decision to fire May.

PNC Bank filed a motion with the trial court seeking dismissal of May’s pregnancy discrimination claim. In doing so, PNC Bank argued that the evidence established that May was fired for a legitimate, non-discriminatory reason and not on the basis of her pregnancy. The trial court denied PNC Bank’s motion for dismissal and ruled that May was entitled to proceed to a jury trial on the issue of whether she was fired because of her pregnancy in violation of the PDA.