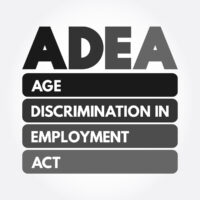 For the past two decades, our Lake County, Florida age discrimination lawyers have fought to protect and vindicate the rights of Florida employees who have been discriminated against on the basis of age. Through their extensive experience representing age discrimination victims, our Leesburg, Florida age discrimination attorneys have learned that older workers are often discriminated against on the basis of age stereotypes. For example, older workers are told by supervisors or managers that they are not “a forward enough thinker,” that they have a “low motivation to adapt,” and that they “cannot adjust to the changing times.” In passing the Age Discrimination in Employment Act (ADEA), it was the intention of Congress to protect older employees from employment decisions, such as hiring, demotion, promotion, and termination, resulting from age stereotypes. As observed by the U.S. Supreme Court in Western Air Lines, Inc. v. Criswell,  472 U.S. 400 (1985), the ADEA commands that “employers are to evaluate older workers on their merits and not their age.”

In this article, our Lake County, Florida age discrimination lawyers explain how the recent decision by the U.S. District Court for the District of New Jersey in Rudolph v. Abbott Laboratories, Inc., Case No. 3:18-06071 (D. N.J. March 3, 2021) illustrates that comments made by supervisors or managers about an older employee reflecting age stereotypes are powerful evidence in proving an age-based discriminatory discharge claim.

In that case, Richard Rudolph (Rudolph) brought an age discrimination claim against his former employer, Abbott Laboratories, Inc., (Abbott), pursuant to the ADEA. Rudolph contends that Abbott violated the ADEA by terminating his employment because of his age. Rudolph was approximately fifty-five years old when he was fired.

Abbott is a global healthcare company. Rudolph was employed by Abbott for approximately fifteen years. He served in various sales positions between 1995 and 2003, at which point he left the company to pursue other opportunities. In 2009, he returned to Abbott as a Marketing Manager of a sales team. He was promoted to Sales Director of a sales team in May 2010. In that role, Rudolph directly oversaw three Regional Sales Managers who, in turn, supervised twenty-one sales representatives. In May 2015, a man named Devlin became Rudolph’s supervisor.

In 2016, Rudolph’s sales team missed its sales targets. For the first time in his career, Rudolph received a “partially achieved expectations” rating on his annual review in 2016. In December 2016, Devlin spoke to human resources representatives about “managing” Rudolph’s performance. During that call, Devlin remarked that Rudolph was “anchored in the past” and described his plan to place Rudolph on a performance improvement plan (PIP) and eventually replace him. During that same call, Devlin asked the human resources representatives whether Rudolph was retirement eligible or whether he had mentioned wanting to retire.

At Devlin’s direction, Rudolph was placed on a ninety-day PIP staring in January 2017. Because Rudolph allegedly failed to meet the performance requirements of the PIP, Devlin recommended Rudolph’s termination and received approval from Abbott’s human resources department. On April 20, 2017, Abbott fired Rudolph. Abbott’s proffered explanation for terminating Rudolph’s employment was that he had missed sales targets in 2016, “allowed 5 out of 21 sales territories to remain vacant of a sales representative,” failed to “effectively manage his sales team and hold them accountable to sales targets,” and did not meet his PIP requirements. After Rudolph was discharged, Devlin sent an email to Rudolph’s sales team stating that “Rich finally retired.” Following his termination, Rudolph was replaced by an individual who is ten years younger.

Abbott filed a motion with the trial court seeking dismissal of Rudolph’s age discrimination claim. In doing so, Abbott argued that it fired Rudolph for legitimate, non-discriminatory reasons, and that Rudolph’s evidence was insufficient to establish that his age played an impermissible role in the termination decision. The trial court denied Abbott’s motion for dismissal and ruled that Rudolph had presented sufficient evidence to proceed to a jury trial on the issue of whether he was fired because of his age in violation of the ADEA.