Worker Claims Pregnancy Discrimination When She Was Fired For “Being Pregnant” 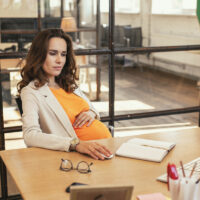 As the U.S. First Circuit Court of Appeals in Hodgens v. General Dynamics Corp., 144 F.3d 151 (1st Cir. 1998) pointed out, “smoking gun evidence is [ ] not required to prove discrimination.” Thus, it is not necessary that an employer tell a pregnant employee that she is being terminated because of pregnancy in order to prove a pregnancy discrimination case. As explained by the U.S. Seventh Circuit Court of Appeals in Sheehan v. Donlen Corp., 173 F.3d 1039 (7th Cir. 1999), “it would cripple the enforcement of the employment discrimination laws” to insist that evidence in an employment discrimination case “take the form of an employer’s statement to the effect that, I’m firing you because you’re [pregnant].”

In this article, our Hommossa, Florida pregnancy discrimination lawyers explain how the alleged facts in the recent decision by the U.S. District Court for the Eastern District of Michigan in Konczal v. Zim Tim, LLC, Case No. 19-cv-12275 (E.D. Mich. April 15, 2021) are illustrative of the exceptionally rare circumstances where an employer leaves a “smoking gun” attesting to discriminatory intent.

During her first night shift, and after her discussion with the co-worker, Konczal informed Kollias that she was pregnant. Kollias, according to Konczal, looked her “up and down” and said “okay” with disapproval. The co-worker stated that Kollias was “visibly and outwardly angry.” On August 10, 2018, after having worked eight shifts since her employment began, Konczal sent Kollias a text message stating that she had to go to the maternity ward because “her feet were extremely swollen and purple.” Kollias covered Konczal’s August 10, 2018 shift.

On August 12, 2018, Kollias informed Ibarra that she intended to terminate Konczal’s employment. Kollias tasked Ibarra with informing Konczal of her termination. That same day, Ibarra left Konczal a voice mail messaging stating, “with all things considered, with your situation, and with you in the middle of being pregnant at the moment, we have to terminate your employment.” Konczal called Ibarra back after the voice mail to complain about being fired because of her pregnancy. According to Konczal, Ibarra explained that he was just telling her to want Kollias wanted him to tell Konczal.