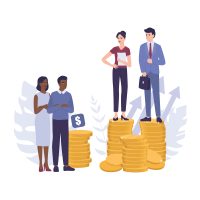 In that case, a man named Harris brought an employment discrimination lawsuit against his former employer, City of Providence (the City), pursuant to Title VII of the Civil Rights Act of 1964 (Title VII). Title VII protects employees from discrimination in all aspects of employment, including hiring, promotion, discipline, and discharge. Harris, who is African-American, claims that the City failed to promote him because of his race in violation of Title VII.

Not only did the City never inform Harris that it had eliminated the position to which he desired promotion, but it also moved the location of the job posting board from outside Harris’ cubicle to the “cafeteria,” a room that Harris never used so he never saw the Plan Examiner posting until after he had missed the opportunity to apply. The Department Director, however, personally told a co-worker of Harris, a man named Dickenson, about the new position. Dickenson, a co-worker with much less seniority than Harris, got the Plan Examiner job.

The City filed a motion with the trial court seeking dismissal of Harris’ race discrimination claim. In support of its motion for dismissal, the City argued that Harris could not establish that he was passed over for promotion based on his race because he never applied for promotion to the position of Plan Examiner and Dickenson was more qualified for the position. The trial court denied the City’s motion for dismissal and ruled that Harris had presented sufficient evidence to proceed to a jury trial on the issue of whether the City did not promote him because of his race.

In denying the City’s motion for dismissal, the trial court focused on evidence showing that the “City seemed to go out of its way to ensure that [Harris]—the only African-American employee in the Department—did not see the job posting.” The City, the trial court pointed out, “offered no evidence that it had a legitimate, non-discriminatory reason for changing the posting location from an area where Harris knew to look for job postings to a place where he would never see them.” Based on this evidence, the trial court concluded that “a jury could infer that the City did not want Harris to know about the Plan Examiner position and acted to prevent him from applying for the promotion.” Having drawn such an inference, the trial court explained, a jury could find that the City’s defense that Harris did not apply or was less qualified was a pretext for illegal discrimination.”