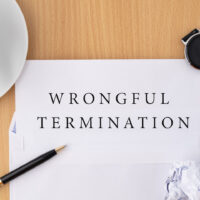 In that case, Shannon Donaldson (Donaldson) brought a race discrimination lawsuit against his former employer, Coca Cola Refreshments USA, Inc. (Coke), pursuant to Title VII of the Civil Rights Act of 1964 (Title VII). Under Title VII, employers are forbidden from discriminating against employees on the basis of race. Donaldson, who is African-American, alleges that Coke violated Title VII by firing him because of his race.

In December 2012, Donaldson was hired by Coke and worked at Coke’s warehouse in East Hartford, Connecticut. The terms and conditions of Donaldson’s employment were governed by a collective bargaining agreement (CBA) between Coke and the labor union.

In November 2016, Donaldson complained to human resources that his co-worker, a woman named Fontanez, subjected him to a racial slur and threatened him with bodily harm when making the racial slur. While Donaldson’s complaint was being investigated, Donaldson complained to a manager that Fontanez, who is not African-American, intentionally tried to hit his car with her car when while they were leaving the parking lot. Donaldson further alleges that he told the manager that Fontanez had bumped into him when he was leaving the men’s locker room. In January 2017, Coke fired Fontanez for her use of the racial slur. However, Coke voluntarily reinstated Fontanez’s employment a few days later in February.

Donaldson filed a grievance pursuant to the CBA, which proceeded to arbitration in September 2017. After considering sworn testimony from witnesses and viewing a videotape of the incident, the arbitrator concluded that it was clear from the video that Donaldson did not intentionally bump the two employees. The arbitrator further found that the testimony from the co-workers who submitted written statements regarding Donaldson’s alleged behavior was inconsistent and insufficient to prove that Donaldson had threatened employees with future physical harm. Consequently, the arbitrator found that Coke did not have just cause to fire Donaldson. As a result, Donaldson’s termination was converted to a written warning for his inappropriate remark that he would push past co-workers in the future.

Coke filed a motion with the trial court seeking dismissal of Donaldson’s race discrimination claim. In doing so, Coke argued that it was entitled to treat Fontanez differently from Donaldson in reinstating her employment but firing Donaldson because Donaldson’s conduct was worse that her conduct. Donaldson’s conduct was worse, according to Coke, because his conduct involved “acts of violence” and threats of “future acts of violence,” while Fontanez’s conduct “reflected nothing more than bigoted ignorance.” The trial court rejected Coke’s argument and denied Coke’s motion for dismissal.

In rejecting Coke’s argument that Donaldson’s behavior was worse than Fontanez’s, the trial court pointed out that Coke’s argument was premised on ignoring evidence regarding Fontanez’s acts of violence and threats of future acts of violence against Donaldson. In particular, Donaldson testified that Fontanez had physically threatened him when hurling a racial epithet at him, that Fontanez also tried to intentionally hit his car when they left the parking lot, and that Fontanez also made unwanted physical contact with him.

Based on such evidence, the trial court determined, a reasonable jury could find that Donaldson “was treated more harshly for a single instance of similar conduct compared to Fontanez, who engaged in repeated threatening behavior, accompanied by personally targeted racial bigotry.” Although Fontanez engaged in “arguably worse” misconduct, Coke “voluntarily re-employed Fontanez only a few days after her termination.” In contrast, the trial court noted, Coke did not voluntarily re-employ Donaldson. Instead, Coke was “contractually compelled to re-employ [Donaldson] after an arbitration award.” Thus, the trial court concluded that it was for the jury to decide whether Coke unlawfully fired Donaldson because of his race in violation of Title VII.